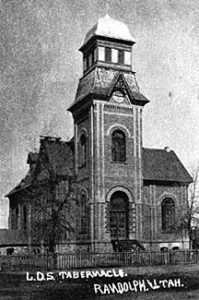 A Brief History of Rich County

Rich County in the northeast corner of Utah occupies a long, narrow area approximately 18 miles wide and 56 miles in length, extending north of Echo Canyon. It is bordered on the east by Wyoming and on the north by Idaho with the southern half of Bear Lake extending into the county. Rich is noted for a so-called buffalo jump kill site where game was slaughtered by Early Man.

Fur trappers visited the Bear River Valley as early as Donald Mackenzie's first Snake River expedition of 1818-19 when Michel Bourdon gave the Bear River its name. The area around the Bear River became a favorite spot for trappers, and trappers' rendezvous were held on the south shore of Bear Lake in 1827 and 1828. The Oregon Trail over which thousands of immigrants to the Northwest traveled cut through a corner of the county. Dr. Marcus Whitman and his wife, Narcissa Prentiss Whitman, the famous Oregon pioneers, traveled on this trail in 1836. The first white settler in the area, Thomas L. "Peg Leg" Smith, operated a cattle business, trading post, and horse exchange on the Bear River near present Dingle, Idaho. Brigham Young unsuccessfully attempted to purchase his business in 1848, but Smith remained in the area until 1863 then he became discouraged and left.

When Congress passed the Homestead Act of 1862, Brigham Young became anxious to obtain control of the land before non-Mormons did. In August 1863 he called Charles C. Rich to lead an exploring party into the Bear Lake Valley to select a site for settlement. The fist settlement, known as North Twin Creek and later Paris Creek, was made near present Paris, Idaho. Since Bannock and Shoshone lndians also used the valley, Rich obtained their permission to settle there in order to minimize conflicts. Other settlements were founded, including Round Valley in 1863; Kennedyville (Garden City) and Laketown, 1864; Woodruff, 1865; Randolph, 1870; and Argyle, 1875.

Originally part of Green River County, which was formed in 1852, it became Richland County in 1864; the name was shortened to Rich in 1868, and a final alteration occurred in 1872 when part of Cache County was added to it by the territorial legislature.

Harsh winters affected the settlement of the Bear Lake Valley. Woodruff averages only 57 frost-free days a year and holds the record for the coldest temperature ever recorded in the state (-50 F. degrees on February 6, 1899).

The development of Bear Lake as a popular recreation area with resorts, public beaches, and summer homes has helped to diversify Rich County's economy.

“A History of Rich County” books by Robert E. Parson are available for purchase from the Clerk’s Office for $15.00. Shipping will be an additional $3.00.

Bear Lake, with 110 square miles of surface area and pristine water quality, is a Mecca for water sports. Activities include sail-boating, swimming, skiing, and scuba diving. Resorts in the area provide access to golfing and tennis. Due to Bear Lake's isolation, a fragile lake ecosystem has evolved and resulted in great fishing. Fish-story sized Mackinaw and lake trout are sought by avid fishermen along with white fish. The famous Bonneville Cisco are harvested in mid January by dipping the fish from the lake in nets, often through holes cut through the ice.
The western edge of Rich County contains some 50,000 acres of the Cache National Forest and the eastern edge borders the Crawford Mountains. High mountain recreational opportunities span the seasons. Winter offers cross country skiing and snowmobiling. Spring features high mountain valleys full of wildflowers. Summer and fall hiking, camping and backpacking and horseback riding opportunities abound for the novice or the more experienced. Deep, long canyons show fall colors at their best with aspen, pine, maple combinations. Hunting opportunities include elk and deer, along with moose and antelope. Other small game are hunted as well.
In addition, Rich County's heritage is steeped in agriculture and Mormon pioneer folklore. Large cattle ranches provide a peek at the old west. Cowboys, horses and rodeos spaced throughout the summer are part of the lifestyle. Each small Rich County town provides a unique look at the turn of the century Mormon architecture.

Census and Other Information from Wikipedia